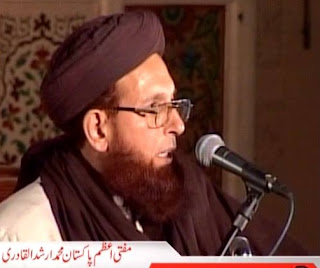 Grand Mufti of Pakistan Muhammad Arshad al-Qadri has been answering the questions of public in the light of Quran and Hadith since 19th of July 1990 at The Masjid of Data Darbar (Ali Hujvery) Lahore. The question-and-answer sessions are held several times a week there.

Only written questions were counted in 2010 AD. These were 96,000 questions in counting, which were answered by him during the period of 20 years. However, verbal questions are countless. Now, more questions has been added during these five years till 2015. In this field, he has an Individual status for such a tough duty (4 times a week) for last 25 years in Pakistan. His Fatawa (Collection of Answers-Verdicts) is being prepared; it will be in hands soon.

Rana Arshad Qadri
For a long time in academic and religious circles he had been called “Rana Arshad”, because of his family background. Mufti Arshad was born on 15th or 16th of February, 1958 in house of ‘Rana Muhammad Tufail. He had been writing word ‘Rana’ with his name, but later on he gave it up. One of his Teachers Allama Muhammad Abdul Hakeem Sharaf Qadri suggested him to write his name as “Arshad al-Qadri” or “Arshad-ul-Qadri”. The majority of the public still knows him as Allama Rana Arshad Qadri Rizvi.
Childhood and Education
His childhood spent in the village of Kot Nainan, Shakargarh,Punjab, Pakistan. His primary education started there. During the Indo-Pakistani War of 1971, his family moved to Lahore city. He started learning his Islamic education from Jamia Rasoolia Sherazia Bilal Gunj Lahore. Timings of Jamia, for those students who also were studying at modern schools at the same time, were different. Those students used to study here early in morning after Fajar prayer. Muhammad Arshad was one of these boys. Their Teacher Allama Muhammad Ali Naqshbandi (Rahmatullahi Ta’ala Alayh) used to teach them during Morning walk, while going to The Ravi River and coming back from there. After this morning session, Arshad used to go to Govt Islamia High School Khazana Gate Lahore to learn his Modern education, he passed his matric there. He passed his intermediate from M.A.O College Lahore, and graduation from G.C.U Lahore with Gold Medal. He completed his masters degree in Islamic Studies from The University of Punjab Lahore. Later on, he earned degrees of M.A Arabic and M.A history from the same University. For traditional Islamic studies he properly attempted and succeeded in the exams of Tanzeem Ul Madaris Ahle Sunnat Pakistan with a good performance.
His Teachers
A few names of his great Teachers and Muslim Scholars are as follows:
1. Mufti Abdul Qayyum Hazarvi Rahmatullahi Ta’ala Alayh (D.2003)
2. Mufti Abdul Qayyum Khan Hazarvi
3. Mufti Muhammad Abdul Aleem Sialvi
4. Allama Mufti Faiz Ahmad Owaisi Rahmatullahi Ta’ala Alayh(D. 2010)
5. Allama Mufti Muhammad Abdul Hakeem Sharaf Qadri Rahmatullahi Ta’ala Alayh (D. 2007)
Bayah and Khilafah
His sheikh is Abu Muhammad, Muhammad Abdul Rasheed Qadri from city of Samundri near Faisalabad. Arshad ul Qadri was given Ijazah and Khilafah in all four orders of Sufism. Chain of his sheikh is linked to Imam Ahmad Raza Khan Qadri.
Ideology
Mufti Arshad ul Qadri is influenced by the work of Imam Ahmad Raza Khan Qadri, Doctor Muhammad Iqbal and Maulana Shah Ahmad Noorani. He held a conference about Imam Ahmad Raza Khan Qadri’s teaching On January 30, 2011 at Jamia Islamia Rizvia Lahore, Rachna Town. According to his views, Reverence of The Holy Prophet Muhammad (Sallallahu Alaihi Wasallam) is an obligation for every Muslim. On 14th of October 2012 he held a conference to reply the blasphemy movie “Innocence of Muslims” in Jamia Islamia Rizvia.
Books
Mufti Mohammad Arshad Qadri is the author of many books. Two dozen of them have been published. He is writing “Fuyoodh-un-Nabi” an Urdu Interpretation of Hadith Book of ‘Tirmidhi’. Two volumes of this work were published in 2014. Hundreds of his books and pamphlets are waiting for publishing.
Organization
Mufti Arshad al Qadri has founded a movement called “Taleem o Tarbiyat Islami Pakistan”. Various gatherings, conferences and seminars are held by this organization. On 28th of April 2013, Islamic Learning Session was organized by this movement at Aiwan e Iqbal Lahore. Movement also takes part in various social welfare activities. Manifesto of this movement is to create unity, service and stability among Muslims. Its Main Office is known as Jamia Islamia Rizvia Lahore. It is located in Rachna Town, Ferozwala, Shahdara. It is working in various fields including publications. Land line phone number of Jamia Islamia Rizvia is 0092-423-7962152
For further information please visit: www.facebook.com/ArshadalQadri
Written by: Abdul Razzaq Qadri on saturday, July 18, 2015