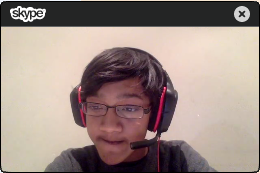 Rehan is one of  the students of ‘E Learning Holy Quran’. He is 14 year old. He belongs to ??Perth?, Western ?Australia?. He started his lessons on Sep 02, 2013. Firstly he read Quaidah Book. Quaidah is an initial book, in which he learnt how to read Arabic Text. The Book starts with Arabic Alphabets and tells a student about sounds, movements and rules of Arabic Reading.
Then Rehan read 30th part (Juzz) of Quran first. After reading that I moved him towards 1st part. He completed 1st para (Part) and I once again moved him to Para no 29. From there he had been reading Para no 28, 27, 26, 25 and 24. We started Para no 23 from beginning of Surah Yasin.
Later on, after a short time we adopted the order of Suras (Chapters) instead of Parts. But we were going from back end to right. As we know that The Holy Quran, Arabic books, Urdu, Persian and some other eastern languages are written from right to left. But Rehan was reading Quran from left to right with respect to Suras (Chapters). When he studied up-to 6th Chapter al-an’aam, I suggested him to start Quran from 2nd para. Because he already had read 1st para. He moved there then.
So, after a few months he has completed Quran today. It was his last Quranic Arabic text lesson. He told me 5th Chapter’s last Ayaat (verses) from verse no 90 to last Ayat 120 today.
He was second student of mine who has read complete Quran with me as well as second student of “E Learning Holy Quran” who did so. First student was Mazin, he completed his Quran reading in July 2013. Mazin was an Urdu speaking (Pakistani native) boy & he was 6 and half year old at that time. I’m also from Pakistan. So, Urdu is my national language, But Rehan is a Burmese Native. So he speaks English Language. With respect to English, he is the first guy who has studied Quran completely with us. It’s an honor for me and my institute, E Learning Holy Quran dot com.  I want to congratulate him and his family once again. Al-hamdu-lillah, we did it.
Abdul Razzaq Qadri